Tsundere is a Japanese term for a character development that describes a person who is initially cold and gradually shows a warm friendly side over time. This is a combination of two onomatopoeic words, tsun tsun and dere dere. This type of character is usually very introverted and is sometimes misunderstood as a person with multiple personalities. In Manga and Anime there are often a lot of tsundere characters. In this top 10 you will find anime series with prominent tsundere characters in varying degrees of likability. Let’s get started! 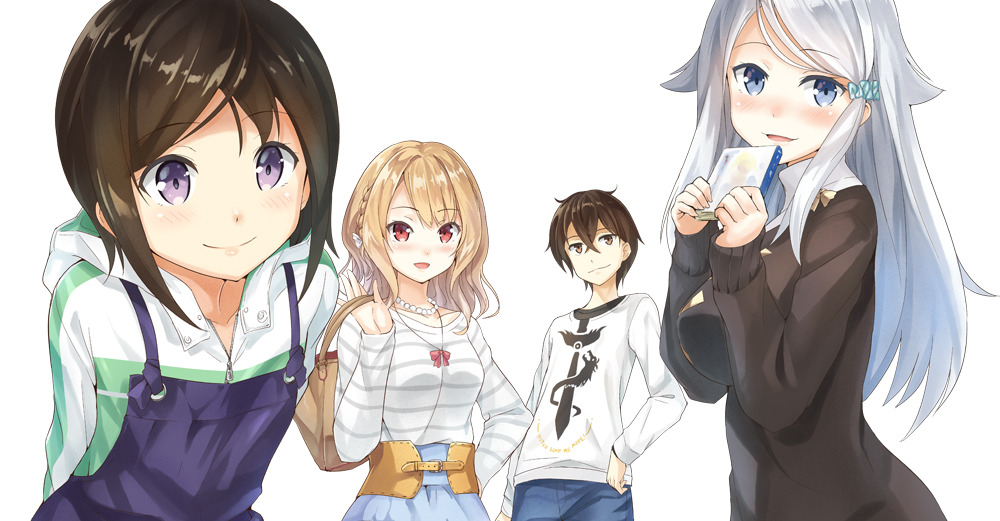 The story revolves around the daily life of Itsuki – a novelist and a heavy sister siscom guy (the sickest thing here is that this little sister is only in his imagination). The boy is surrounded by countless other characters: a writer who loves him passionately, an old schoolmate, a writing colleague, a sadistic tax employee, and the editor of a book. boy. Everyone is taken care of by Itsuki’s wonderful little brother Chihiro. But Chihiro is currently holding a secret…

The tsundere star of this anime is Haruto. Or rather, it was his sister who took a hard line on her brother. Haruto comes to things pretty straightforward and while he tries his best with everyone including his sister, she pretends to want nothing to do with him while madly in love with him.

9. Hidan no Aria (Aria of the Scarlet Ammo) 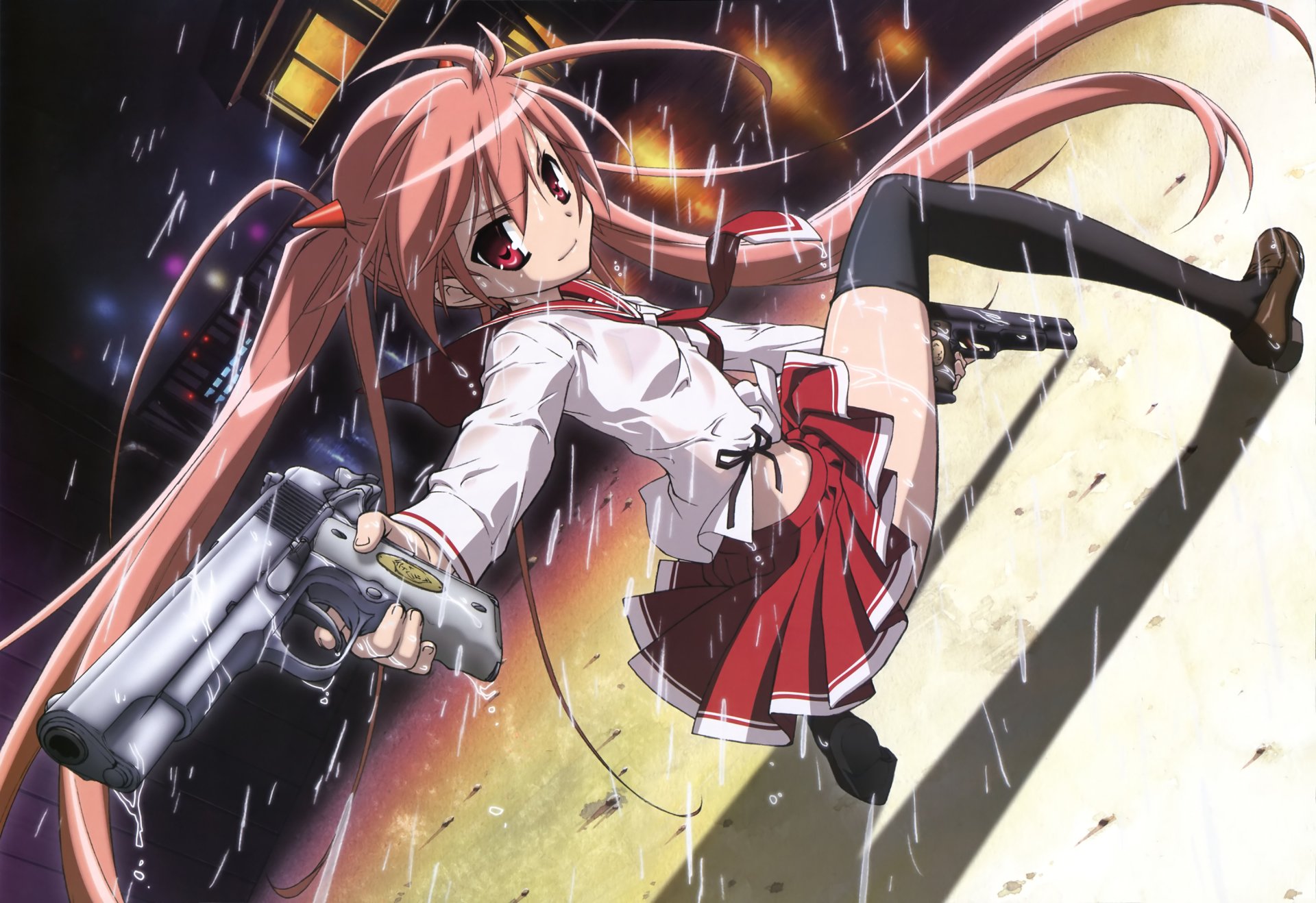 The story begins at a famous high school Tokyo Butei, which produces outstanding talents with a variety of toys called Butei. In the film, we will meet a guy Tohyama Kinji who has a special physique and when stimulated, Kinji has the ability to activate super-mode “some kind of power”. Kinji lives alone because he doesn’t want anyone to know about his special ability, but one day his house is bombed and his seemingly smooth life is suddenly ruined, thanks to that. where Kinji met a talented girl in the class that Kinji was studying – Aria Holmes Kanzaki – the best student in the school.

Aria is a lot like what we have to know and expect from tsundere characters. The hair is short, angry and usually red or close to red. She is constantly making demands and is always full of confidence that she can only fall back on specific situations. 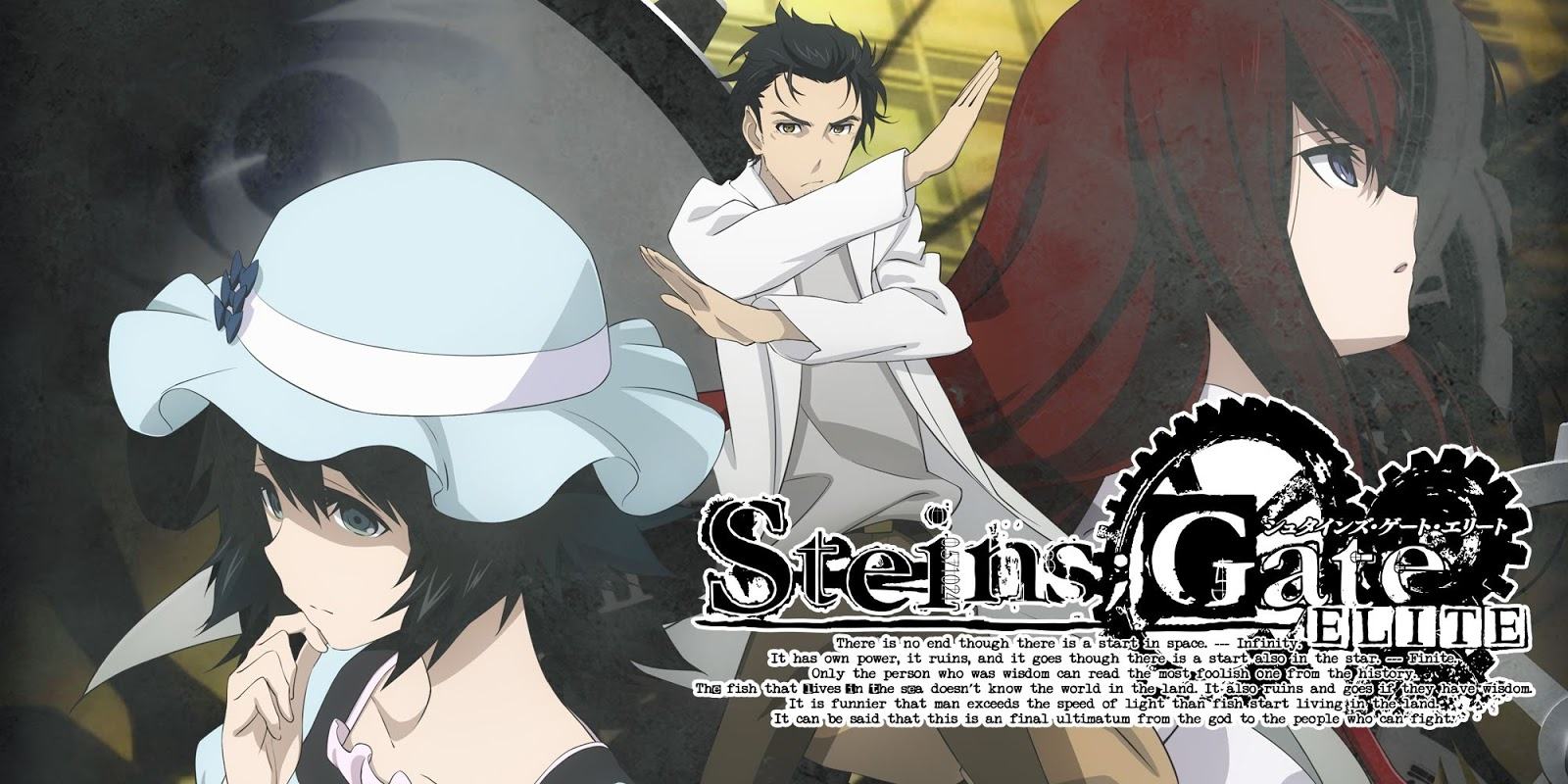 Steins; Gate is adapted from one of the famous Visual Novel Game by 5pb and Nitro. The story takes place in Akihabara, and follows mad scientist Rintaro Okabe and his friends trying to create a device that can send timeless messages to the past. While they were performing various experiments, they were tracked by an organization called SERN, which researches the possibility of time travel. In the midst of a crazy world of virtual reality, past and future, the group of friends must find a way to survive to defeat and stop the evil plan of the evil organization SERN when everyone has realized the truth behind the dish. the gift that god gave them to “control time”…The story begins to happen!

Steins; Gate, while a sad, dramatic anime, gives us an excellent tsundere in Kurisu aka Christina. Kurisu doesn’t stay true to herself but even when she does she fails miserably, Kurisu almost always breaks out when Rintarou lashes out with her tone and words. Yes, she has feelings for him, but tsundere’s signature outburst of violence, as well as her quickness to accuse him of being a pervert, put this great anime on our list.. 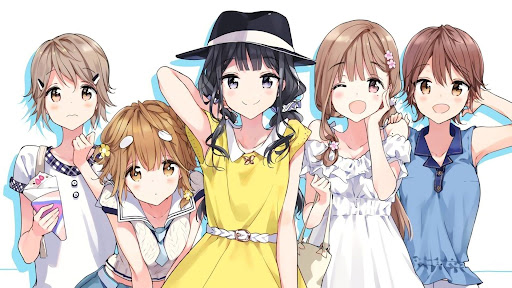 As a child, Makabe Masamune had to endure all kinds of “tortures” at the hands of the beautiful, rich, and haughty Adagaki Aki. Because of his chubby appearance, Masamune was nicknamed “pig” by her, and he was “dead”. The whole childhood was “eaten” like that, Masamune decided to take revenge. He studied hard, practiced sports, ate in moderation, and finally became the “heart-stopping” handsome man of many girls. The moment for revenge is reached when he meets Aki again at the new transfer school. But will this revenge turn out as “sweet” as you think? Will the heart listen to the mind? What will this love story starting from “hate” look like?

Masamune-kun no Revenge actually gives us two tsunderes. It was Aki who at first wanted nothing to do with Masamune. Not only did she reject him, she more or less irritated him with her curt and attitude. Even so, when Masamune spends time trying to get into her heart, Aki resists relentlessly until the end by being violent and harsh. Masamune also lies to himself that he doesn’t want her and lies to himself developing his own tsundere complex about his true feelings as the story progresses. 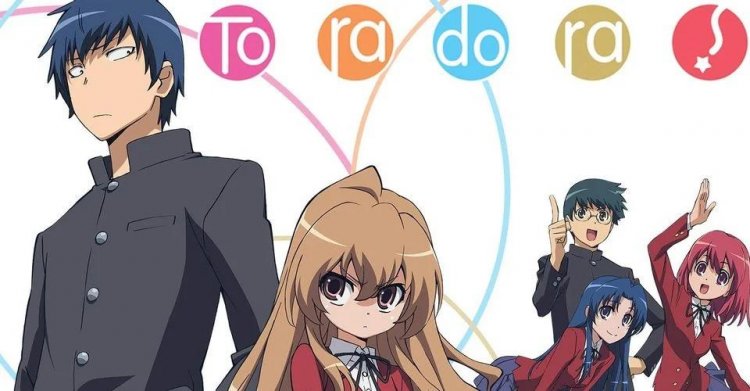 With Toradora you will witness very familiar emotions: joy, sadness, anger, hope… It all started when Takasu accidentally bumped into the “super-monstrous beast of the school”–Taiga Aisaka –also a classmate, Kushieda’s best friend, a person whose eyes are even colder than Takasu’s. Aisaka likes Kitamura, Takasu likes Kushieda but two people Kushieda and Kitamura (and many other “witnesses”) more) thinking that Takasu and Aisaka “have nothing” to do with each other, the funny stories begin…

Although the story has varying degrees of acceptance, a great example of a tsundere’s way of thinking is introduced in Taiga. She scolded Ryuuji, she firmly refused to be honest with herself and her own feelings. If you want to see the archetype of the tsundere play out in a perfectly stereotypical fashion, then Toradora is the anime not to be missed.

5. Zero no Tsukaima (The Familiar of Zero) 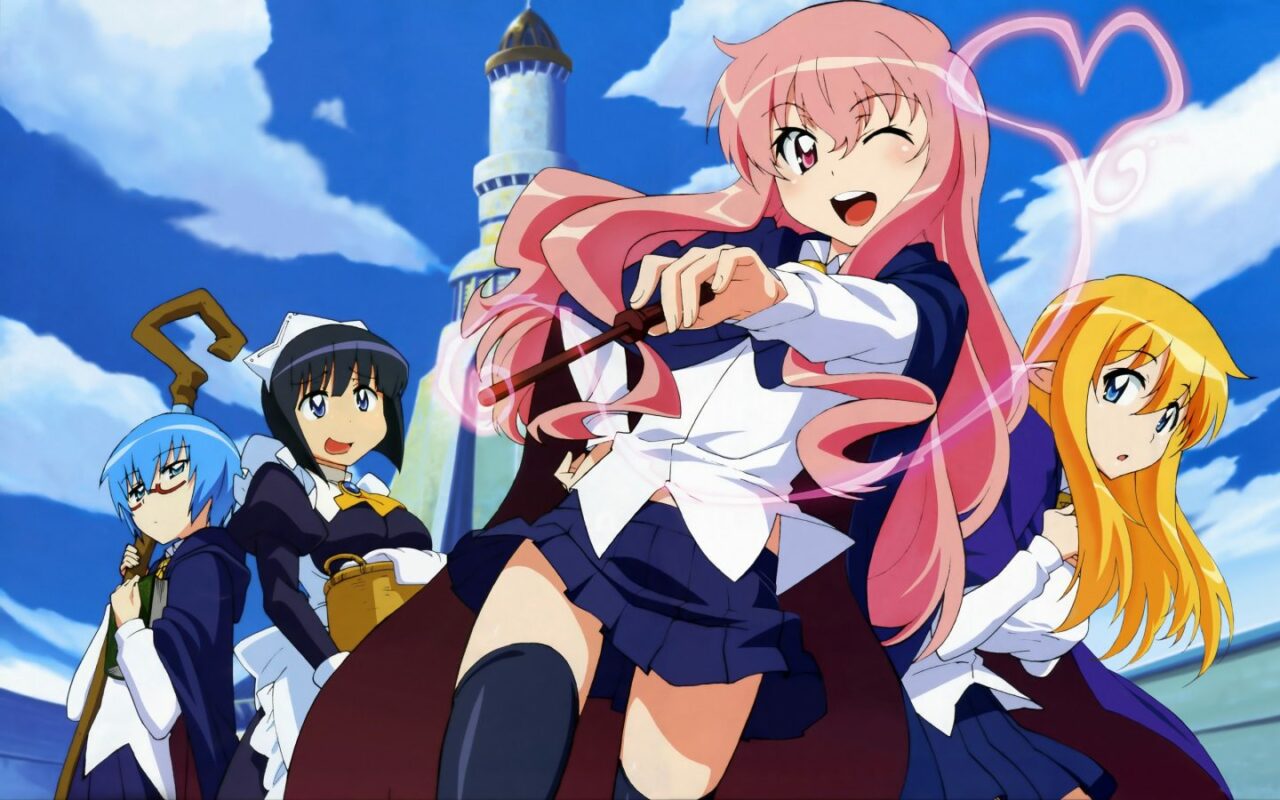 It happened in a world different from earth. There people were divided into two categories: the nobility, who could use magic, and the commoners, who could not use magic. The main character is Louise de la Vallière, the third daughter of a noble family in the kingdom of Tristain. Although she is a 2nd year student at Tristain Magic Academy, she is terrible at magic (will find out the reason later) so she is nicknamed “Louise Zero”. At the beginning of the second school year, each student will have to perform a sacred ritual: “summoning summoned beasts”. The summoned beast will be both a servant and a companion to each witch. While everyone successfully summoned the summoned beast, Louise caused an explosion as usual and a Japanese boy from earth named Higara Saito appeared. Due to the rules of the ritual, Louise was forced to accept Saito as her summoned beast. Since then, Saito naturally became a “reluctant slave” for Louise, he was treated and beaten. The two’s feelings gradually increased throughout the course. Together, they uncover many mysteries about Saito’s powers and Louise’s lousy level of magic.

Louise has the signature red hair (pink, but close enough) that we often see with massive tsundere characters. She is extremely bossy and extremely hot-tempered. She is always the one to vent over the smallest things. And while she harbors feelings for Saito, she will fight relentlessly and physically abuse him true to her tsundere origins.

4. To Aru Kagaku no Railgun (A Certain Scientific Railgun) 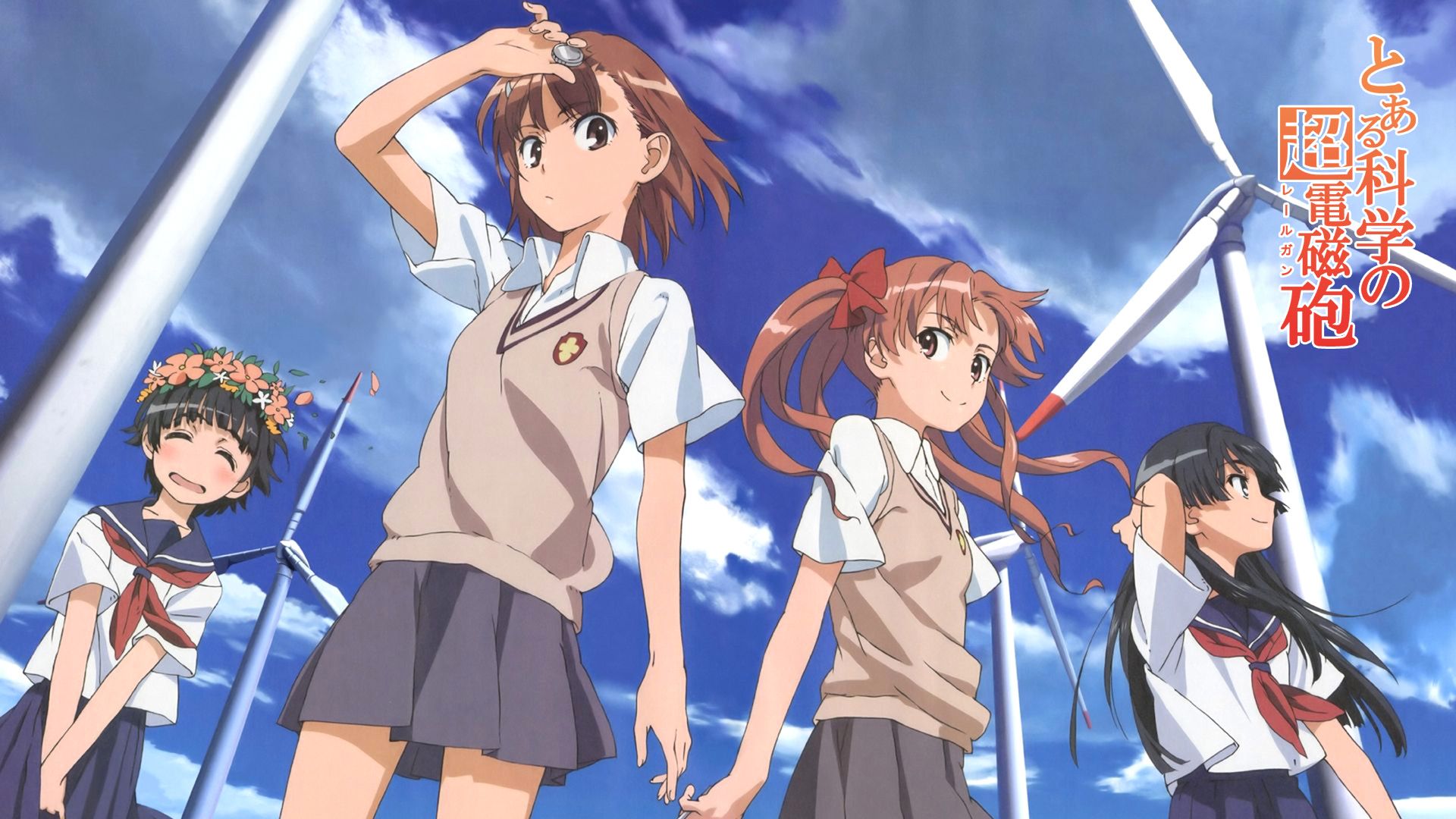 To Aru Kagaku No Railgun, adapted from Motoi Fuyukawa’s side-story manga of the same name, is a spin-off from Kazuma Kamachi’s original To Aru Majutsu no Index light novel. The story takes place in a land where superpowers and magic exist in everyday life University City with 2.3 million inhabitants, where 80% of the population participates in the Special Brain Development Plan. . The story revolves around Mikoto and her younger sister Kuroko who tries to maintain order in the University district as a Judgment..

Originally a spin-off of To Aru Majutsu no Index, Railgun focuses on the tsundere queen Mikoto. Extremely powerful, she has no problem charging straight into battle, but seeing or interacting with Touma causes her to collapse too quickly or send her into a rage. The poor girl can’t even enjoy her love of frogs and cute things due to her shy and tsundere nature. Kuroko’s jealousy also embarrasses poor Mikoto further, sometimes leading to even more comical outbursts. 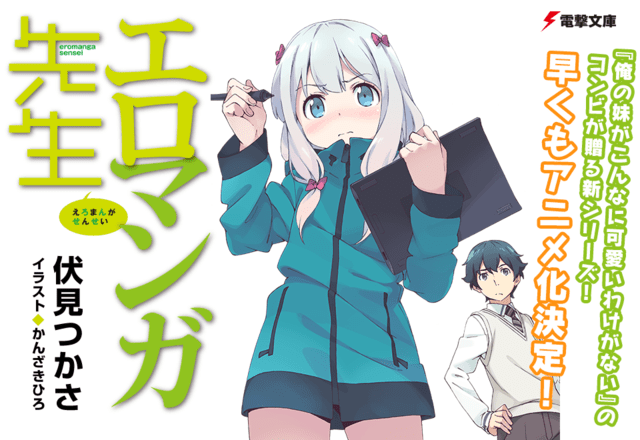 Eromanga Sensei revolves around Masamune Izumi – a high school student and light novel author. Masamune’s younger sister is named Sagiri – a true shut-in girl who hasn’t stepped out of her room for a whole year. She even made her brother cook and bring food up to her room every time she signaled by stomping on the floor. Masamune always wanted his little sister to step out of the room, because she was the only relative he had. The illustrator who works with Masamune – pen name Ero Manga Sensei – specializes in drawing extremely perverted works. Masamune had never met his illustrator, so he thought he was a perverted, disgusting otaku. Unexpectedly, Ero Manga Sensei turned out to be his only sister. Things weren’t confusing enough until a beautiful female shoujo manga author appeared to confront the two brothers.

Sagiri is our classic tsundere. From constantly shouting “dame”, she constantly gave requests and orders to Masamune, who had to become an adult all the time. He’s not even allowed into her room unless she lets him – go crazy when you realize that there’s only the two of them in the house, and her jealousy reaches its climax, leading to more flare-ups, when she discovers that Masamune is spending time. with Elf Yamada, a fellow rival author. Sagiri is a great example of tsundereism. 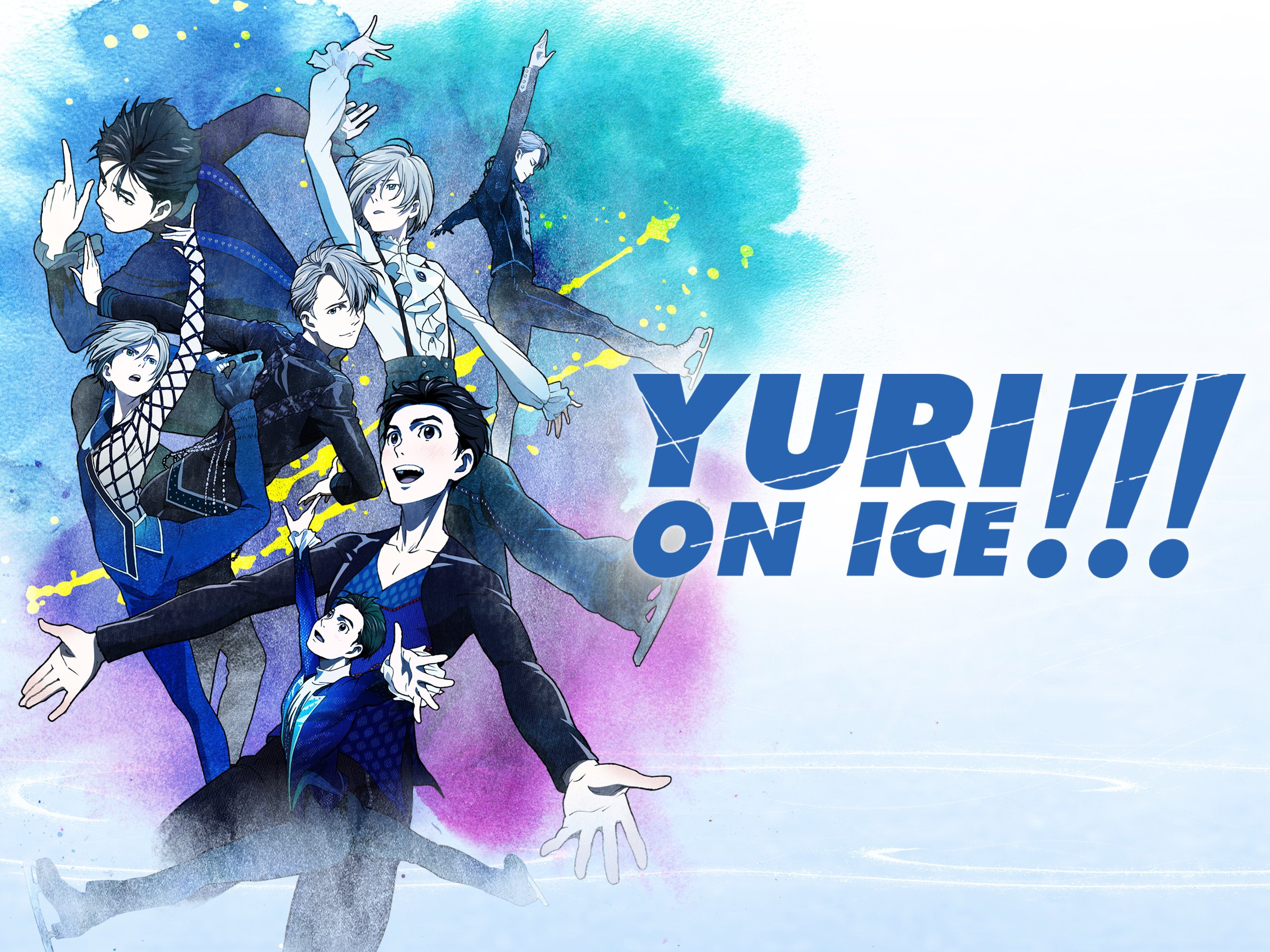 The plot revolves around Yuri Katsuki, who carries all of Japan’s hopes to win the Gran Prix Finale figure skating competition, but he is completely defeated. He returned home feeling both wanting to retire and continuing his career. With mixed emotions in his heart, he locked himself in his parents’ house. Suddenly, Vitor Nikiforov, along with Yuri Plisetsky, appeared in front of him and the three of them joined the showdown in the Grand Prix.

And you think only girls can be tsundere? Yuri Plisetsky is our moody male tsundere. Yuri won’t stop there to get Victor’s attention and affection. He is sweet and devoted to Victor while cruel, cold, and malicious towards Yuuri. His rough scoldings were somehow not enough to stop Yuuri, from not only returning to the ice, but pushing himself beyond his own limits to protect both his role with Victor but also his own. his relationship with him too. 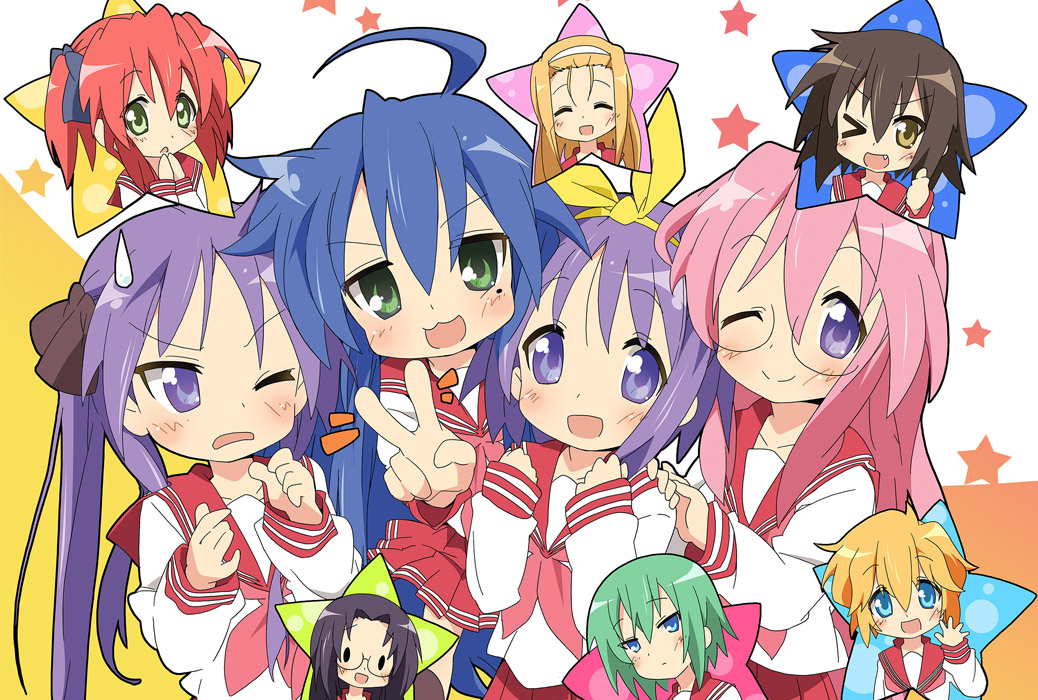 Kagami is famous as the tsundere queen. With her stern tone, she repeatedly reminded Konata for her carelessness in studying and not doing her homework. As a pure tsundere, Kagami often has trouble talking directly and clearly about how she feels about things and can easily catch her off guard as her face turns red, emotions turn angry and she is silent. As a member of the purple-haired masterace, Kagami is the complete opposite of her older sister Tsukasa, who is well-meaning but a bit slow in her advancement.